So at the start of this summer K came to me and told me that he had an idea for a movie. He wanted to call it “The Happening” and truly had a plot line worked out and everything. So I was determined to get this going for him. We sat down and he dictated to me as I got things into the computer for him. However, I think I screwed up royally. I was trying to assist in embellishing a bit on his story (just in adjectives and descriptives) because he said that he wanted it to be a really really long movie like Eragon. But, what I should have realized was that trying to do that during his dictation would wear him thin and he’d get frustrated at how slow it was going. We did not get very far that day, and sure enough, he spent the rest of the summer talking about the movie, but not wanting to really work on the movie any more.

This past week or two he’s been seeming to be having a ‘rough patch’ emotionally, develomentally, all around really. I am having a very hard time pinpointing who, what and where of it all, but really trying to focus on letting him work through this stuff, and give him some well-needed extra attention. SO…. today was the day that we created a very short-movie plot for him.
It was a really great project for all of us. We got out all of the favorite toys; legos, imaginex, bionicles, train tracks, building blocks, playmobils, and tons of figurines…. OH, of course the pirate ship. And we built an entire “village” for his movie plot/line: 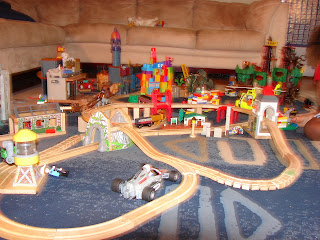 It was so much fun building, all the while he was getting more and more into the idea that I initiated and building more characters and stories along with it. We drew up a title page (“The Tales of Legend”) was this one’s name, and a ‘the end’ page to put in the film…. found the Eragon dvd b/c he really wanted to use the music from the movie in his movie, and we were set to go!
I get out the video recorder and say “action”….. video tape the title sheet and let him know he can create his own story and I will just get it all on tape for him!
…………… he froze
= )
He said, “Well if I’m going to do my stories, you have to leave the room.” SOOOO funny b/c he must think other days that I’m in the room (but doing something else) I don’t HEAR his stories!!! I told him I have heard ALL of his stories before and he could do a great job! But no go…. he did not want to have me video tape him. So…. I left the room, but proped the camera in view. He questioned if it was on, recording, and I said it was recharging. He said he knew it was on, but he went ahead anyway! As long as I was not watching, he and D created their stories and did a great job! Most of all…. they just had so much fun doing it!
We are anxious to see the final product. I had tons of trouble trying to get the camera to play on the TV this evening, so they turned in and I need to get that transfered to a video tape for him to see in the morning. It will be really fun to see!
Tons of fun! 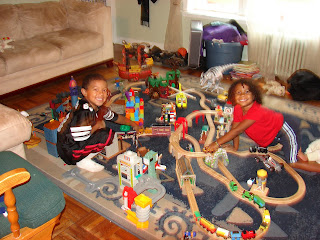